Omoregie, Baker and Matthews open their season and Santa improves his own 60m World Record.

This weekend saw the Christmas Classic, the first competition in the Cardiff Met Grand Prix Series. For most athletes, this open meeting is the first opportunity  to compete in the 2014-15 Indoor season. First in action was GB sprint hurdler David Omoregie. Omoregie dipped under 8 seconds to win the 60m Hurdles in 7.89 (faster than his season opener last year), before  running a PB in the 60m, breaking the 7 second barrier for the first time with a clocking of 6.98. Also in the 60m, two Cardiff Met athletes also went under 7 seconds for the first time Marvin Bheka (6.89) and Lewis Clarke (6.98).

Another class act was Commonwealth Games competitor, Curtis Matthews, who won the combined events competition with a score of 2945 points. Becca chapman (UK U23 Long Jump Champion), won the 60m final in 7.70, and went on to win the long jump with 5.78m.

Another highlight of the day was the 60m Santa Dash – quickly becoming a popular tradition for the Cardiff Met Christmas Classic – with a winning time of 7.2.

Well done to all who competed. Merry Christmas from all at Cardiff Met Athletics! 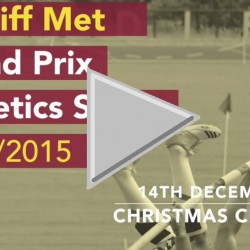