The three-day event in Sheffield saw some impressive performances from track and field athletes across the full range of disciplines. Friday evening is timetabled as a sprints showdown with heats, semis and finals of the 60m and 60m hurdles all being decided within a few hours. All Cardiff Met 60m sprinters swiftly progressed to their respective finals. For the men, Richard Tremblen and Marvin Bhekah executed their races well and finished 5th and 7th. In-form scholars Mica Moore and Rebecca Chapman ran excellent races, but just missed out on repeating their medal winning performances from last year finishing 4th and 6th respectively in what was a hotly contested event. In the 60m hurdles, men’s captain Nathan Higgins also just missed out on a medal by 0.01 of a second, but smashed his personal best in the process running 8.17s.

Athletes’ tactical awareness was tested on the second day where most aimed to progress as easily as possible through the rounds. All the athletes in the 400m made it to the semi-final (Joe Reid, Daniel Blain, Rhiannon Linnington-Payne and Megan Rodgers) and 1500m runners Mattie Edwards and Niall Holt made it through to their finals. In the 3000m, Jon Hopkins, Josh Griffiths, Emily Brown and Tanja Griessbaum made the 15 laps of the EIS Arena look easy, qualifying into Sunday’s final.

Some stand-out performances were necessary on the final day to maintain Cardiff Met’s impressive track record at this event. The first athlete to step up was PGCE student, Sian Swanson, who tripled jumped her way to a bronze medal. Fresher, Joe Pearse then seized an opportunity in the high jump to take bronze with an inspired lifetime best performance of 2.04. The points total began to rack up as another fresher,  Dan Trueman, went on to take 4th place in the 200m final with a time of 21.99. Helping bolster Cardiff Met’s reputation for producing sprinters, Mica Moore snatched a bronze in a highly competitive women’s 200m in a time of 24.43. After competing at the televised Birmingham Grand Prix the day before, the team were especially proud of Mica for returning back and contributing to the team in such a way.  On to the 400m and Joe Reid showed as much grit and determination as he did fluency and grace as he managed to bag a bronze in 48.77 – the first of many we hope. Megan Rodgers also featured in the women’s 400m final coming 5th, after breaking the 55 second barrier for the first time in her semi final.

Steeplechase specialist, Jon Hopkins, was next to pick up a medal after a little help from team-mate Josh Griffiths in the 3000m. Despite a successful weekend up to this point, the team were yet to win a Gold medal. Becca Chapman, the UK U23 Champion and multi BUCS medallist had an excellent chance in the long jump. To the delight of the watching team, Becca grabbed the opportunity  with both hands to claim her place on top of the BUCS podium for the first time.

The 8th and final medal of the weekend came from the women’s 4x200m relay team, winning a silver in a highly competitive race. With similar aspirations in the men’s race, Cardiff Met set off well but drama soon set in after a trip on the home straight of the second leg. The Cardiff Met athlete fell and just managed to recover and hand the baton over to get the baton round for 3 points.

Finishing in second place overall by the end of the weekend, the team standing confirmed Cardiff Met’s status as being in the top two university teams for track and field in the UK. 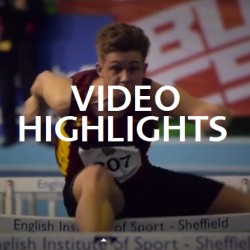