Rounding out the University Sports Year this week was the Cardiff Met Athletics Union Sports Awards, the night celebrates all the fantastic performances achieved by Met student athletes across 33 individual AU Clubs. Athletics was represented at the awards as in previous years by our scholars and invited guests, thank you to those who where there to support the club and our award nominees. Following up a brilliant 2016-17 BUCS season, second year sprinter, Amy Odunaiya was the winner of the Most Improved Individual Award. Amy has been recognised for her performance improvements in the 100m and 200m, including a brilliant medal at this years indoor BUCS, as well as her contribution to relay teams at both championships.

This years Club President, Morgan Jones, was also an award winner on the night being recognised for his undeniable consistency at BUCS across recent years as well as his contribution the athletics club and university. Below is a Morgan receiving his Athletics Union Award of Merit award from Scott Barratt-Gibson. 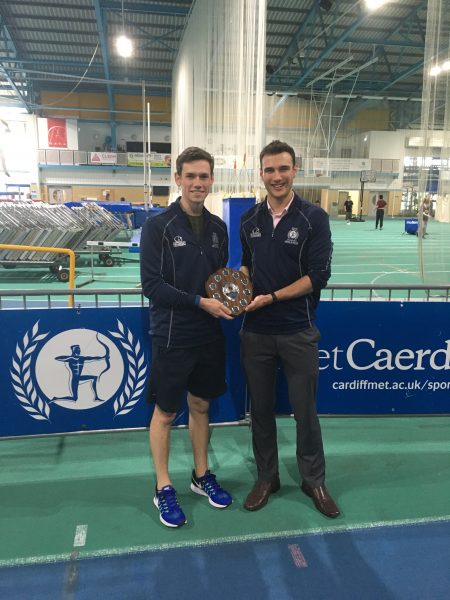 Which brings us expertly to this years Committee Nominations and Elections. Thank you everyone who put themselves forward for roles within the club. James and myself have been delighted for the contribution and support this years committee has made to the club. With over 100 members it is vital that we have a functioning and enthusiastic committee to enable us to deliver a brilliant experience to all our membership.

On to this years election results (full results in a pop out below). Next years Club President will be the duly elected Scott Barratt-Gibson, congratulations Scott. Moving laterally from the presidents role, Morgan Jones will be assuming the Club Secretary role from the out going Hannah Johnson. Thank you Hannah for all of your excellent work. In the Club Captains roles Justin Tarrant and Adele Nicoll will be supporting next years freshers and club members to settle into Met life and training at university. Supporting them with social, training and competition organisation will be Kieran Wood and Amy Odunaiya as Vice Captains.  Re-elected as Cross Country Captains we welcome working once again with Gareth Griffiths and Lucy Marland.

Thank you for everyone who contributed to voting and congratulations to our new committee members.